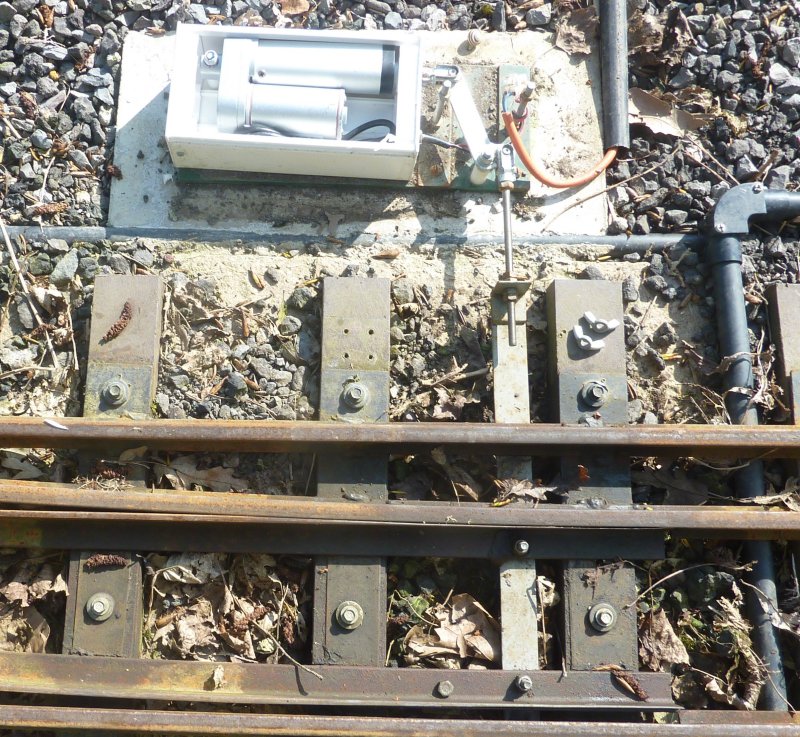 It is several years since the upper yard was completed at the Bath and West Railway by those members most interested in 5" ground level, and shortly afterwards a second (lower) yard was added. From the start, access to the main line involved a rather complicated process, the Yardmaster first having to call up the signal box requesting permission to allow a train onto the main line.

Following discussions with the signalling department it was agreed to make and insert a facing point near to the lower yard allowing access to the main line to obviate the need for reversing. However, there were a couple of concerns. Firstly, since the new point would be a considerable distance from the signal box, and as all main line points on the railway were operated pneumatically, it would be impractical to extend the air line that far. Secondly, those running the signal box were not too happy to allow a distant yardmaster to operate the new point since being a facing point, if left in favour of the five inch yards, a derailment to a train already on the main line could occur. The solution was to install point detection which would inform the signalmen of the state of the point, and to install a signal on the main line some way prior to the new point.

The next question was how would the point be activated? Conventional lever operation was immediately rejected, so another solution was sought. Our main line is 32mm high flat bottomed steel rail, so a fairly powerful operand was called for. Consideration was given to methods used elsewhere such as car wiper motors and so on, but again failed to gain support for varying reasons. I had myself experimented with car door locking motors intending to use them on the track in my own garden made from 16mm aluminium rail. However, I had found that they tend to "bounce" at the end of the stroke so it was not possible to guarantee that the point blades would always finish their travel against the appropriate stock rail and in any case would probably not have sufficient power for our situation.

On that well known internet sales site I came across Linear Actuator Motors. These are apparently used as door and window closers, generally intended for operation on 12 volts, available with a range of stroke lengths, and relatively inexpensive at around £20 or so each. The shortest available stroke when I made my purchase was 50mm, although I have recently found one with a stroke of only 20mm which might have been more suitable for our application. A major consideration was that these units have a built in limit switch to stop at each end of the travel, and claim to be built to IP54.

The ram is 20mm in diameter, and has a cross drilled hole about 10mm from the end. With a tommy bar through this hole, and with care, the ram can be unscrewed from the body of the unit, mounted in the 3-jaw chuck, centre drilled, drilled 5mm, and tapped M6. Into this hole is fitted a short length of M6 studding to carry a clevis fork.

In order to provide further protection for the unit, it is mounted in a short length of 100x50mm Univolt plastic trunking cut to 186mm long, a 6mm hole is drilled in the bottom of the trunking 25mm in from one end, and 25mm in from the edge. This is to locate the actuator (which itself has a 6mm mounting hole) in the trunking. The trunking is fitted with two end caps. One is drilled to a suitable size to take a rubber grommet through which the actuator's electrical cable will pass, whilst the other is to accommodate a shouldered bush through which the ram will pass. The hole should be centred 25mm from the side of the end cap, and 27mm from the bottom edge – i.e. on the horizontal centre line. The size of this hole will obviously depend on the size of the bush.

Ideally the bush should be turned from PTFE or nylon rod to reduce friction on the ram, but to be a close fit on the ram to avoid the ingress of water. This end cap can now be permanently fitted into the trunking using a suitable PVC glue.

The trunking needs to be fitted on a suitable base plate. I used a piece of 6mm acrylic sheet 280mm long and 110 wide which has proved to be very satisfactory. A 6mm hole is drilled 25mm from one end, and 25mm from the edge of the baseplate. This hole should coincide with the hole drilled through the bottom of the trunking to locate the actuator.

Diagonally opposite, a second 6mm hole is drilled, 40m from the end, and 10mm from the edge. Both holes in the baseplate should be countersunk on the underside.

Since our first unit was installed in mid-2017 it has been subjected to the vagaries of the weather, and has been submerged twice when the brook alongside our track overtopped its banks. There were no problems when it was first used this year. Out of curiosity, the top of the trunking was removed, and there were no signs of water having accessed the box.
As mentioned, the actuator ram moves 50mm between extremes of travel. The blades on our point work move 15mm, so to provide the required movement, a simple bell-crank arrangement has been used. The bell-crank can be made from 3mm thick aluminium with a 6mm hole for the pivot, a 6mm hole at 75mm centres from the pivot along one arm, and a further 6mm hole at 15mm centres along the other arm.

This all sounds rather complicated for what is effectively a very simple mechanism. Hopefully with the accompanying drawings, and pictures of the unit in situ, all will become clear.
The baseplate of the unit is screwed down to a concrete pad cast alongside the track, and the actuator is connected to a 12volt battery by way of a DPDT toggle switch wired to allow the actuator to be operated providing "normal" and "reverse" positions of the point blades. When operated, the blades move fairly slowly, but very positively, and lock firmly at both ends of the travel without the need for any additional security measures.

Finally, as can be seen from one of the photographs, the whole unit is protected from big feet by a cover folded from aluminium sheet with hazard markings applied to the surface screwed to the concrete pad.