We are now on Facebook as the Bath and West Steam Railway.

We are now open for members to run their engines on Saturdays, following social distancing guidelines. 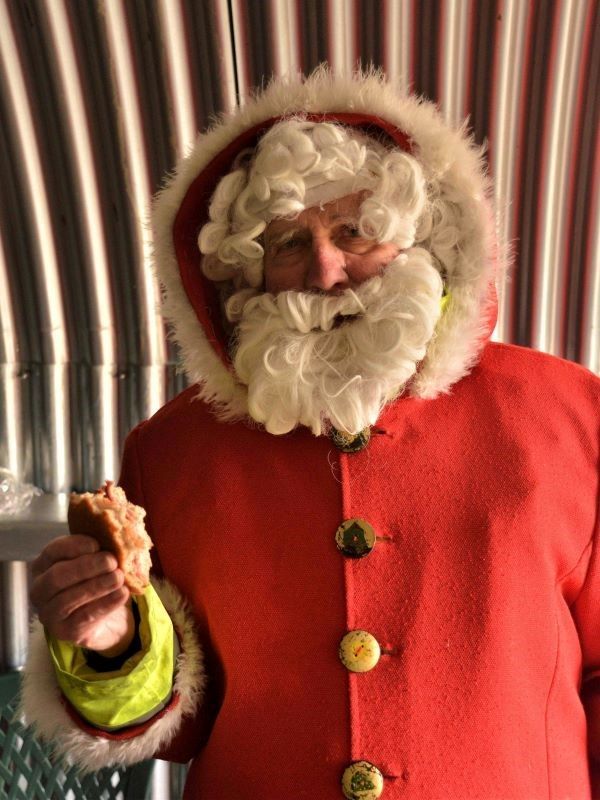 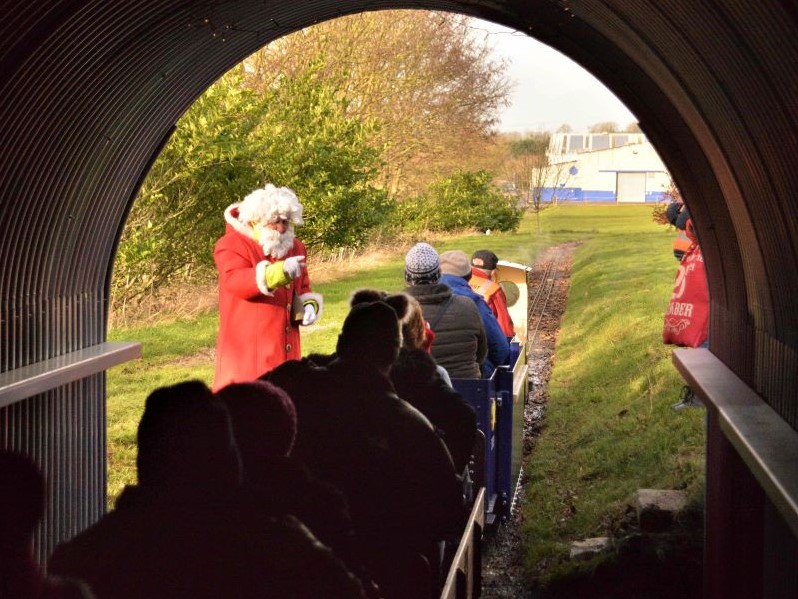 The weeks up to Christmas are a very busy time for us Santas.  Many of us have to go off and service grottos, although this is usually not a bad posting as we normally are given a nice, large chair to sit in; and the grotto, although perhaps dimly lit, is kept warm so that the little ones and their parents don’t have to suffer.

Another task that has become more common in recent years is the need for a Santa to travel on what are called “Santa Specials”.  Here we board a, usually steam hauled, train, and we walk up the carriages “Ho, Hoing” and passing out seasonal cheer and presents for those young enough to believe in us.  This can be very enjoyable but it does mean that you have to walk the length of the train, carrying your sack of presents.  Often there is no elf to help you and it can all get a bit tiring, especially as you have to do the return journey in order to collect the sledge and reindeer.

The one I was called to in North Somerset was a new experience and very different.  I was approached for my services by a lady called Essmee.  At least I thought it was a lady until I was informed that this was an acronym for an organisation, The East Somerset Society of Model and Experimental Engineers.  (What a mouthful, it’s no wonder that they shorten it to a person’s name!).  This organisation runs a miniature railway at the Bath and West Show Ground which they call “The Bath and West Railway” and this was the railway for which a Santa was needed for their Santa Special.

It proved a most interesting, enjoyable and worthwhile excursion, even though the weather was not at its best.  (One must remember that Santas frequently have to put up with much worse and are of course acclimatized to the cold.) I was able to stable the sledge and reindeer in the copious facilities provided by the Bath and West showground.  This was really good; they have ample accommodation for many more reindeer than I required for my pre-Christmas sledge.  (Nothing like the size of the one I need on Christmas Eve!)

I was collected out of view of the visitors, who were living it up with mulled wine and mince pies in the warm club house, and taken down to my ‘Grotto’.  My train, of three sit-aside carriages and pulled by a very pretty blue locomotive, took me over a bridge, alongside a stream and a lake until we finally entered the tunnel which was to contain my grotto.  The tunnel was delightfully lit with tiny lights and looked very fairy like and Christmassy.  Near the end of it was a chair for me, and waiting patiently were two elves, a real luxury.  These elves it appears had been hastily trained in all the health and safety issues by Essmee and so, red hatted, they were more than adequately prepared for the task which lay ahead.  They took charge of my sack which I had charged with a variety of presents to suit the different ages of little people that I was to chat with.  (They soon learned to distinguish the class of present beneath the wrapping).

Then the first train arrived (the elves were in contact with the station so that we knew when a train was due.)  The train stopped in the tunnel and I was able to walk along the train issuing instructions on the correct behaviour for Christmas Eve bed-time, ho-hoing, discovering whether there was a chimney on the house in question or whether I might have to use a cat-flap, or make us of my magic key, and most importantly, finding out from their adults if they had been good enough.  An affirmative answer meant that the elves handed me an appropriate present for me to hand to the little person.

The train then departed, having given a merry whistle, and the elves and I settled down to prepare and wait for the next train.

I read in the unofficial Santa Website that both children and their parents had enjoyed this novel experience especially as they had been able to wait in the warm for their train the meanwhile sampling mulled wine and mince pies.  It was also generally agreed that the presents were a good choice.

All good things come to an end and after the last children carrying train had left another train was sent for me and the elves and so I was able to return to my reindeer who had been enjoying the rest, and the carrots and hay provided.

I hope I will be able to help again next year. Best wishes, Santa Claus 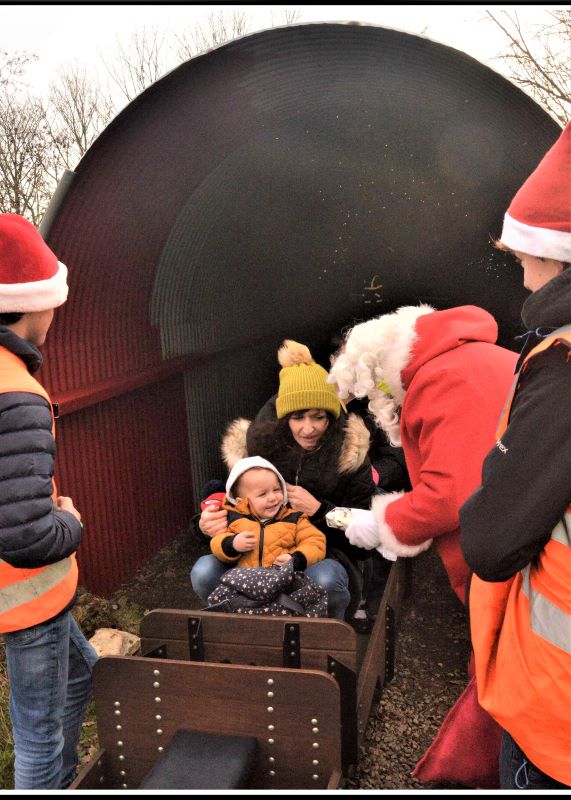 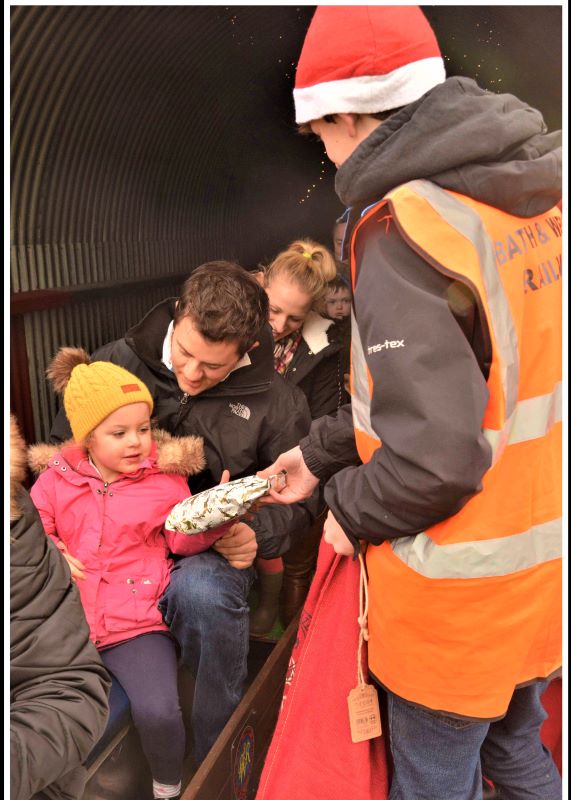 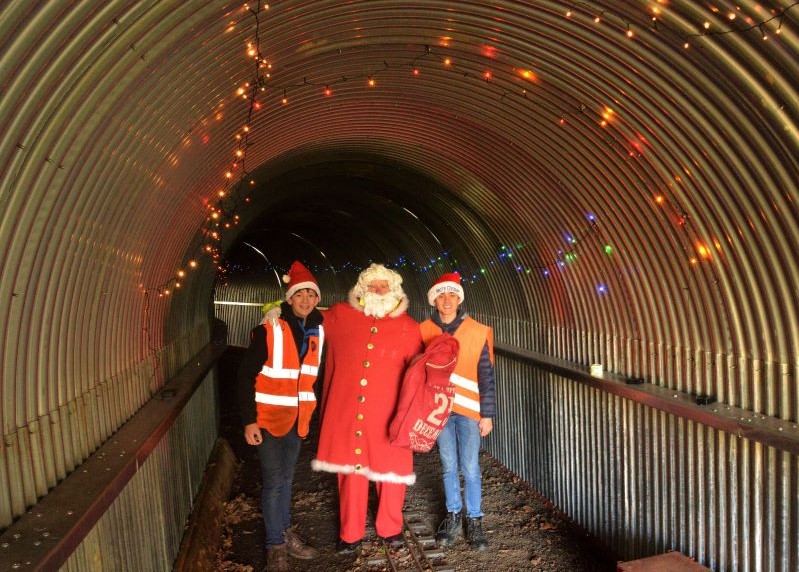