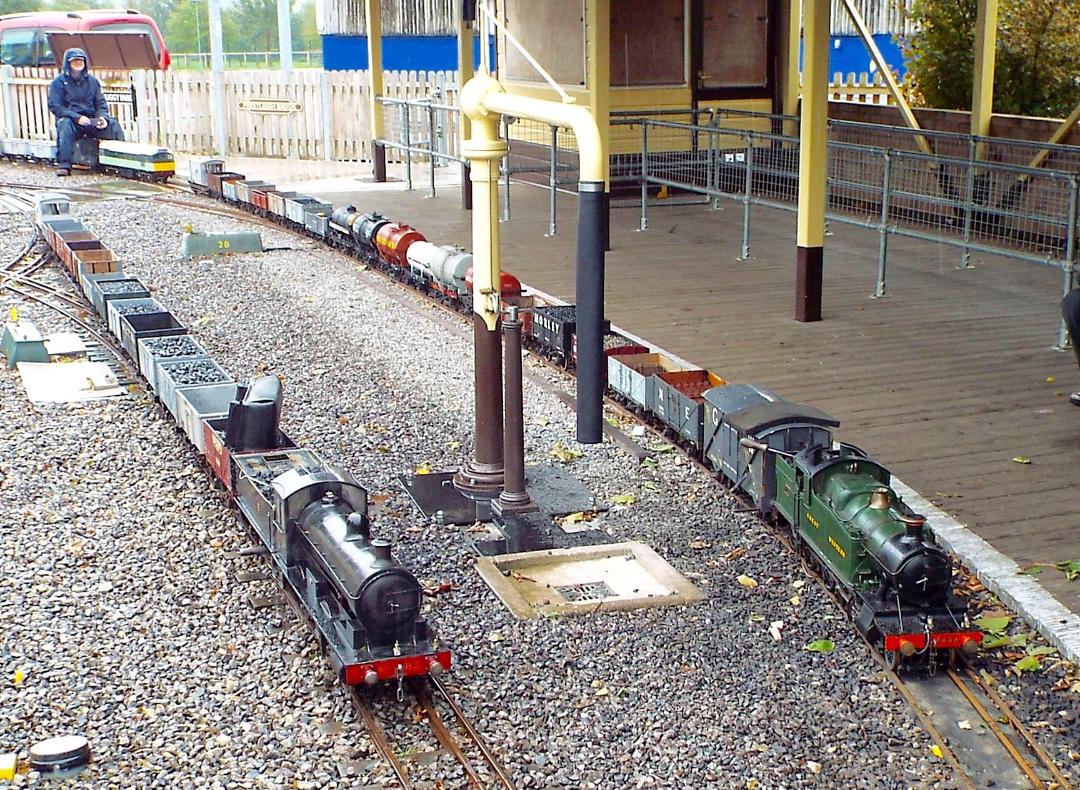 Following many weeks of warm sunny weather it was disappointing that a change began a few days before this event. On Saturday, after a dry early morning, it began to rain and the decision to put the toys away was taken late in the afternoon. On Sunday morning we were greeted by rain, however, by 11.00am the rain had cleared and we enjoyed a pleasant warm, sunny afternoon.

The event was well attended by enthusiasts from Yorkshire, Lancashire, Lincolnshire, the Midlands and the Home Counties bringing with them a large collection of rolling stock, ten steam locomotives, and three electric "diesels".  On Friday, the large upper yard of the railway was almost filled with the wagons.  Alan Whitehouse was busy with his 0-4-0  "Brush" shunter building up trains in the yard, and as soon as steam locos were ready,  a number of trains were taken onto the main line. As the day proceeded the strength of the wind increased, and with strong gusts, there was some concern that wagons might be blown off the track. However, perhaps of more concern was that drivers themselves were at risk not just from the wind but also from debris falling from the trees alongside part of the track.  Despite this, running continued until about 17.00, and after disposal of the steam locos, and the transfer of the stock to the Wessex Suite which was used for overnight storage, most of the members and partners retired to the ESSMEE club room where all enjoyed a fish and chip supper thanks to the organisation of Angie Gregory.

On Saturday all of the stock was quickly brought over to the upper yard.  With some doubt regarding the likelihood of rain, a couple of owners decided not to steam up.  However, as on Friday, trains were quickly prepared and out on the main line.  With gradually deteriorating conditions most drivers dressed to suit and continued to circulate on the half mile main line.  The effect of the cold damp air on the exhaust from locos led to an almost ethereal appearance with the steam enshrouding the drivers.  Unfortunately, the weather eventually won with increasingly heavy rain.

Sunday morning appeared to be most unpromising.  The rain was already extremely heavy, and the prospects of any running appeared to be very unlikely.  A number of the party decided to spend time putting their stock into their travel boxes, whilst others remained in the club house discussing railway related topics, and examining the wagon components made by ESSMEE member Dr. Mark Phillips using 3D printing.  Most were impressed with the finish on the mouldings and the suggestion was made that this could be the way forward for more rapid wagon construction.  Then by 11.00am the rain stopped and the sun came out.  Those who had resisted the temptation to pack away their locos and stock proceeded to the upper yard and were rewarded by being able to run until late afternoon.

Thanks must go to the wives of a number of ESSMEE members who provided more cakes than could be consumed over the weekend.

Despite the weather related problems, everyone agreed that it had been a successful and enjoyable weekend, and expressed the hope that a similar event could be arranged in 2019, but perhaps not over the weekend of the Autumn equinox!